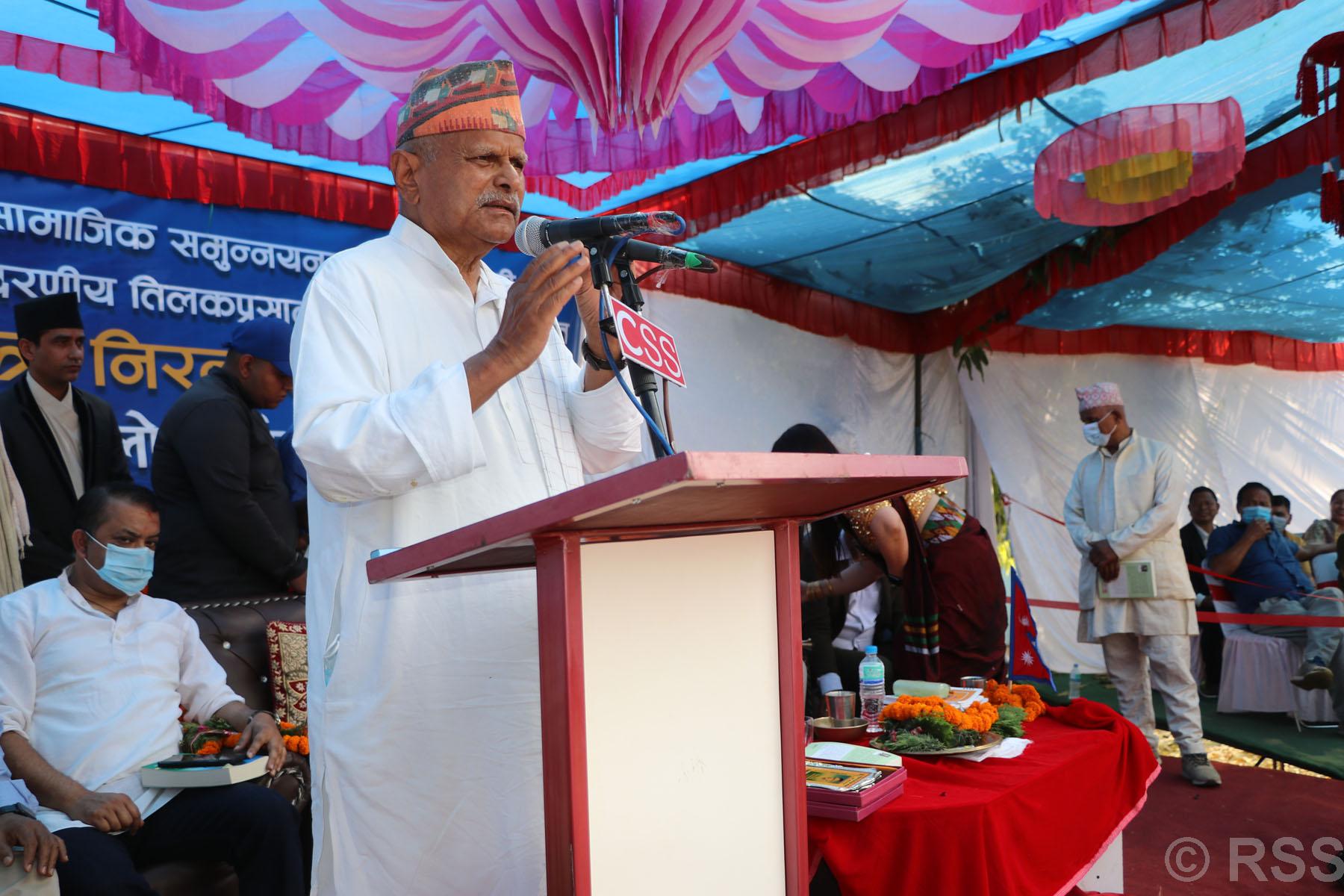 NC had played a significant role while promulgating the new constitution and bringing the rebellion Maoist party into a peace process, he reminded, adding, “The civic foundation of democracy is however strong in Nepal.”

Dr Yadav asserted, “Nepalis are aware citizens. They have extended cooperation in each epoch-making political change in the country.” Time has come for us to consolidate a new system, he viewed.

The former President complained that he was for solving country problems while promulgating the constitution but the NC shunned that proposal. He further reminded, “I was for resolving Tarai/Madhes problems in course of introducing a new constitution, but NC itself distanced me.”

He lauded that social activist Tilak Prasad Sapkota’s book ‘Yatra Nirantar’ has vividly depicted the past political events. The present generation can learn a lot from him, Dr Yadav stressed.

On the occasion, 1008 Swami Gyananada Saraswati Maharaj said writer Sapkota had played an incomparable role in society by involving in various religious and social organizations. One can make his/her life simple and successful by documenting every good endeavor, he suggested, adding that history is not created suddenly but by the works, one does gradually with benevolent intention.

Moreover, Nepali Congress General Secretary Dr Sashank Koirala viewed that Sapkota had a huge contribution to his election victory three times. He expressed worry over NC’s failure to recognize Sapkota’s contribution to the party and development.

NC central member and lawmaker Gagan Kumar Thapa accused the government of mocking at rule of law, accountable politics, and democratic character. Sapkota’s book can be an inspiring document for it has a reflection of life with political integrity, he observed.

Former lawmaker Shankar Pande commented that ‘Yatra Nirantar’ is living history. It has meticulously captured the facets of nationalism, democracy, and socialism.

Social and political analyst Hari Sharma praised Sapkota as a mentor and said his book is a source of inspiration to many. Former Vice President of the Non-Resident Nepali Association (NRNA) Kul Acharya spoke about Sapkota’s contribution to politics and society.

President of the Bijaya Development Resource Centre Laxmi Gautam on behalf of the Bijaya family lauded Sapkota’s contribution to developing the organization to the present state.

Author Sapkota said the book had incorporated his political, social, and personal life experiences through his assimilation of the socialist concept of BP Koirala and while providing guardianship to Gaidakot. He was inspired by BP Koirala to join politics and his father and he has been living for the society than for himself, he said.

Similarly, on the occasion, the author’s son Keshab Prasad said he is proud of his father as a contributor to politics and society.

President of the book publisher, Bijaya Foundation, Trilochan Sapkota, said proceeds from the book sale would be spent in welfare activities.

On the occasion, former President Yadav provided honor to Gobinda Kandel and Tek Narayan Shrestha, who spent life in prison along with author Sapkota in 2017 BS and honored the late Surya Bhakta Adhikari posthumously.

The book published jointly by Sangrila Books and Bijaya Foundation has 508 pages mentioning the political, social, and individual life experiences of Sapkota. A democratic leader, Sapkota had to spend jail term for advocating for freedom in course of democratic movements in the country.