KATHMANDU: Kathmandu, the capital city of Nepal, has topped the global pollution chart yet again, becoming the most polluted city among 50 cities across the world.

The sky of the Kathmandu Valley looks misty today with high concentration of dust particles and smoke produced by forest fires that have been currently occurring across the country.

According to Sachina Shakya, a meteorologist, there is no immediate possibility of rainfall and wind-blowing in the Valley meaning that the air pollution will continue still for some days.

Earlier, the government had shut down educational institutions for four days from March 31 to April 3 due to air pollution.

The Valley which witnessed some improvement in the air quality due to brief rain and wind blowing a few days earlier has been covered in smog again. 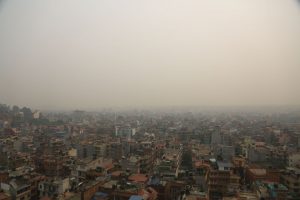 According to the air quality monitoring center of the Department of Hydrology and Meteorology, Dhading measured highest 344 AQI at 8:30 am today followed by Bhaktapur, Ratnapark, Bhainsepati with less than 200 AQI.

The AQI above 150 is considered harmful from the point of human health.

The Kathmandu Valley has been the most polluted across the world based on this data.

According to AQI updates as of 8:40 am, the AQI of the federal capital was 233. When the AQI level goes above 200, it is harmful for the people to come out of houses.

People have started suffering from problems such as eye-irritation, feeling heavy while walking and difficulty in breathing, with the air pollution existing in the country.